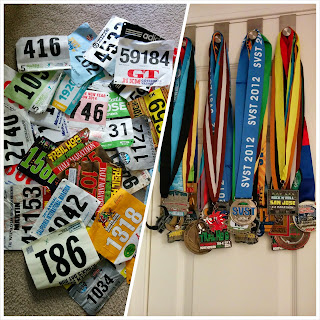 According to my Garmin, it's been four years since I logged my first regular run. Six months earlier, in November 2010, I had completed a 5 km race, but I found running so unbearable that I retired my running shoes directly after. But in May 2011, I gave it another go, and it stuck. Looking through my Garmin statistics, it would be fair to say that I've been a pretty regular runner ever since. Statistically, I've run an average of 1,8 times a week, each run averaging about 4,8 miles (7,8 km). Only three times, have I gone more than three weeks without running, with the longest break being 33 days.

It's been an interesting journey, to say the least. Thinking back, there is so much to say, but some things stand out more than others.

First year
In one word: Struggle
Highest High: First time I ran 5 km/3.1 miles without walking.
Lowest Low: Running, in general
Biggest lesson learned: I revisited running because I had started exercising regularly, changed my diet and was working towards a healthier me. No matter how much I disliked it, running burns a lot of calories. To hold myself accountable, I signed up to different races. So, by using running as a weight-loss tool and being motivated by participating in races I made running work for me. Lesson learned, running deserves more than one shot. Giving it another chance (or a third, or a forth) might be the key to the puzzle.

Second year
In one word: Discovery
Highest High: Finishing my first marathon, California International Marathon, in December 2012.
Lowest Low: California International Marathon. The horrendous race conditions made me visit the darkest corners of my psyche. Until that race, I had no idea how miserable I could be or to what extent I could deplete my self-confidence. If you're curious to read more about the experience you can read my full race report: http://www.scandinasian.org/2012/12/the-marathon-survivor.html
Biggest lesson learned: I lost a lot of weight during my first year of running and I found myself having a much improved body to discover. While exploring the boundaries I soon discovered how running could bring the highest of highs, but it could also bring you right back down. I truly got to understand and learn that running is as much a mental challenge as it is a physical one.

Third year
In one word: Tired
Highest High: Running through the empty streets of San Francisco's China Town, one rainy morning, before the daily hustle and bustle.
Lowest Low: The swim leg of Silicon Valley International Triathlon. Due to the Californian draught, a controlled lake swim in pleasant temperatures got moved, and turned into a foggy and freezing (56F/13C) ocean swim in Half Moon Bay.
Biggest lesson learned: After two years of achieving new heights and discovering new abilities, with the culmination in finishing my first marathon, I was tired. I stopped seeing improvements, I became slower and I had to learn how to be ok with it. But I did learn, that everything has its time and place. I learned that my running would never be sustainable if it was only driven by results.

Fourth year
In one word: Reliable
Highest High: My husband's surprise during Chicago Marathon. Unbeknown to me, my husband had asked some friends and family members to record short messages. These messages were then added to my playlist and throughout the race I was surprised by the voices and encouraging words from people who cared for me. The messages had me smiling, crying, laughing and snorting out loud. The support was overwhelming and it was the most thoughtful and heartwarming gift.
Lowest Low: Underestimating a trail half-marathon. To mix things up during marathon training, my husband and I decided to run a trail half. Having run longer than 13.1 miles/ 21 km several times in training, I got cocky. Too hot and too steep became a miserable reminder that under any circumstance, one should always respect the distance!
Biggest lesson learned: Running is truly an exercise in patience. After four years, I finally feel at peace with my running. I don't necessarily love it, but I wouldn't want to be without it. Lesson learned, running can be a sport and a challenge, but it can also be a comfort and a companion.

Home is where my stuff is 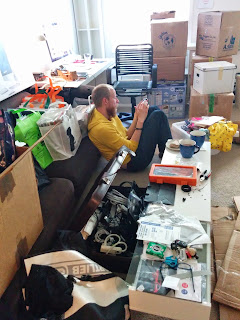 Home. What is home? About one month ago my husband and I left our old home for our new home.
My home is now in Sunnyvale. But I also go home to Sweden every year, and I stay for a few weeks before I return home to California.

My childhood home is still very much my home, until I stay there for an extended period of time and eventually I will get home sick. In many ways my husband is my home, but when we leave our home to visit other places, I feel more like a girl traveling with her favorite teddy, than a snail carrying its home on its back. Superficially, home can be where I sleep that night, but that home is within a certain context such as "go home to the hotel".

As significant as one's home is, it also abruptly changes nature as soon as one decides to leave. I'm currently residing in my twelfth home, seventh since moving away from my parents. Some of my former homes are more sentimental to me than others, but no place retained the value it once had.

While packing and unpacking our newest home, it got me thinking. I think my true home is were my stuff is. It's not as superficial as it sounds. Because it's not just stuff, it's the fact that my stuff exist because I acquired every singel one of them (by myself or by proxy). Also, I've made deliberate decisions on where I've placed them. Everything I own is where it is because I put it there, so nothing can really ever be out of place. And I think that's the answer to the question. Home is a place where nothing is out of place. It's a place were things are exactly how you decided for them to be. Home is a place where nothing can be wrong, it is always right, because it is yours.
Posted by Jennifer at 8:10 AM 0 comments