The Beauties and The Beast

Last week I came back from an epic road-trip with my dear BFF, Theres. We met up in New York (JFK Airport) and picked up a rental car, and over the next 15 days, we drove from New York to Miami, via Philadelphia, Washington DC, Charlottesville, Charlotte, Atlanta, Tallahassee and Tampa Bay. Needless to say, we saw and experienced a lot!

It seems futile to sum up such an intense vacation within a blogpost, especially considering the many twists and turns we had through out the trip. One night we stayed at a shady and dirty road-side motel outside of Philadelphia just to check in at a 5 star hotel, less than a mile from the White House, the following night. We often ate a sandwich for lunch, while parked at a gas station, just to arrive at our destination and go out to have a nice dinner at places like JCT Kitchen and Bar in Atlanta. One day we would buy rain-boots and the next we would be tanning on Miami Beach.

But there are a couple of things worth mentioning, that has less to do with what we saw, ate and did and more to do with the circumstances under which we travelled.

This is the fourth major trip Theres and I do together. 2009 we did a road-trip from San Francisco to LA, Grand Canyon and Las Vegas. The following year we went island-hopping in Thailand and last year we went diving in Mexico. Since our trip to Thailand, we both live much healthier lifestyles. This has resulted in a combined weight-loss of about 100lbs. In the process, both of us has found strength in eating correctly and exercising regularly. So unlike our old selves, we did not use vacationing in a car as an excuse to overindulge and be lazy. We made a point in booking hotels with a gym/cardio-room and we exercised every other day.

One evening when I was up-loading photos onto my laptop, I realized I had our old photos from Thailand on my computer. We were both shocked to see our "before-pictures". It's been about 1,5 years since we took those photos, and look where we are now. I am so proud of the accomplishment  I feel a need to share my excitement. 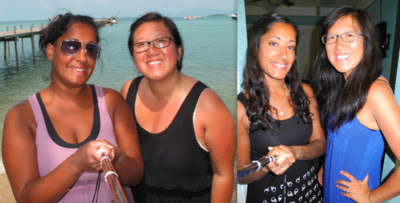 The other things I need to share is about the car we drove. As I mentioned, we picked up a rental car in New York. As we travelled on a budget, we decided we didn't need a big car, as long as it was reliable and big enough for two. We got our wishes granted. It was with a certain surprise and hesitation we accepted the car we were given. True, it was big enough for two. We were also able to fit our luggage, at least after we folded the back seats. Our new shining steed soon earned itself a name. The Beast. 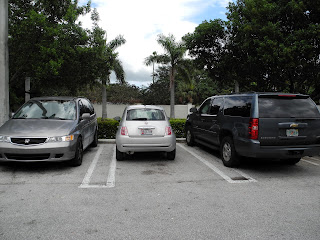 But don't judge a book by its cover. It was surprisingly strong and fast. We had plenty of space in the cabin and needless to say, the milage was awesome. It costed us roughly $20 to drive from Atlanta to Tallahassee  (approx. 265 miles). Initially, we were a bit concerned about the safety aspect of the car. In a car crash, we would not have faired well. But again, there was no need to worry. Other cars (and trucks) treated us as if we were bicyclists. They gave us plenty of room and drove very carefully around us.

All in all, the road-trip was fantastic. There are so many things I could have written about and so many impressions I would have liked to share. But in the end of the day, places, foods and sights will still be there. It is who you get to share them with that makes it special and turns a trip into a once in a lifetime experience. I can proudly say I got to share this amazing memory with The Beauty and The Beast.
Posted by Jennifer at 3:53 PM